The trade fair company is by far the largest solar plant operator in the state capital of North Rhine-Westphalia.

The Chairman of the Management Board, Werner M. Dornscheidt, formulates his company's ecological philosophy as follows: "Ecological sustainability must become a bigger part of the corporate mind-set, alongside cultural and social sustainability. We are delighted with our decision to build this solar plant. For the location in Düsseldorf. For the use of renewable energies. For the further development of promising technologies in the future. After all, we are the platform for innovation here."

The "Messe" project presented a major challenge for F&S solar. Due to the varying orientations of the roofs on the halls, differing mounting systems had to be used. Since 2009, the photovoltaic system with a peak output of 714 kWp has been feeding approximately 66,000 kWh of electricity annually into the grid, which is sufficient to supply 190 households in the region. This photovoltaic system can save up to 455 tonnes of CO2 annually. 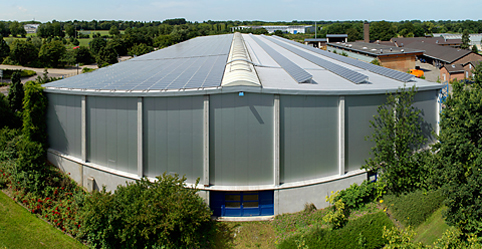