Extensive sounding works have paid off

The waste of the Second World War, metal scrap from post-war times and ore-bearing rocks represented special challenges in building the solar farm in Anklam, county of Vorpommern-Greifswald.

The high number of ore-bearing stones in the ground forced the ordnance clearance to sound very deep into the ground. The soil had to be partially condensed to guarantee the stability of the sub-construction with 6,819 poles and a total weight of 520 tonnes.

Despite the extensive sounding works, the solar farm Anklam could be put into operation after only six weeks. Since its commissioning on 28th February 2014, the 32,200 PV panels are producing green current on a shadow-free surface for about 2,256 households. The peak performance of the solar park amounts to 7.9 Megawatts, and around 5.5 tonnes of CO2 can thus be saved per year.

The solar park in Anklam was built on a conversion area which used to be a military airport. Special dazzling- and fire-protection expertises guarantee that the sport flight operations are not affected. 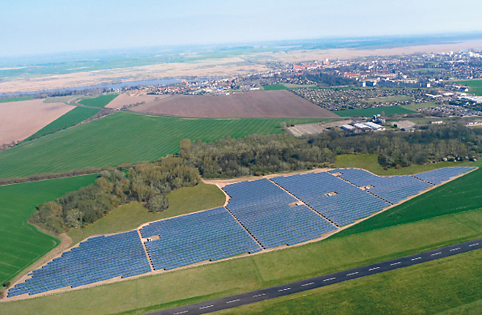